Leslie Feely Fine Art is proud to present an exhibition of recent paintings by Kikuo Saito. This will be the artist’s first solo show with Leslie Feely. He had been previously represented by Salander O’Reilly Galleries until they closed.

Kikuo Saito was born in Tokyo, Japan in 1939 and moved to New York City in 1966. He studied at the Art Students League and worked as a studio assistant to many preeminent artists, among them Larry Poons, Kenneth Noland and Helen Frankenthaler. He also worked as a set designer and has worked with such theater luminaries as Jerome Robbins, Peter Brook and Robert Wilson. Before he began to concentrate primarily on painting, Saito was also known for his own poetic theater pieces which incorporated wordless drama, costumes, light, music and dance.

In his paintings, Saito combines the painterly with the calligraphic, sometimes using a fully loaded brush and sometimes tracing thin “written” lines. Rich and seductive painterly gestures interweave over delicate washes and over an almost hidden under-painted grid. Stenciled letters occasionally appear; not only suggesting a different way of seeing or reading, but also adding a sense of structure and resistance to the more freely applied abstract strokes.

Saito uses color bravely, suggestively and beautifully. While sometimes intense, his colors are always balanced. They range from the bright and joyous, the warm and sensual, to the cool and slightly melancholic. While his exquisite color harmonies and gestural configurations at first absorb the viewer’s eye, they in turn culminate and resonate with personal and emotional expression.

Kikuo Saito has been exhibiting his paintings since 1976 in many group and solo shows. He was an artist-in-residence at Duke University in 1996 and a visiting professor at Musashino Art University in Tokyo, Japan. He currently teaches painting at the Art Students League and works out of his studio in downtown New York City. 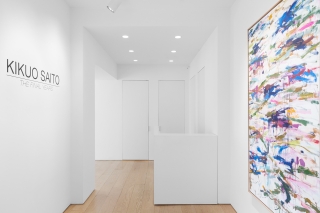 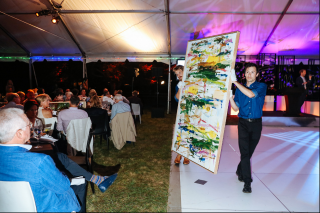 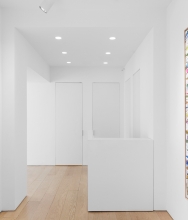 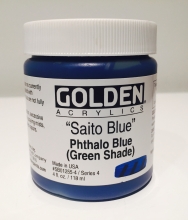 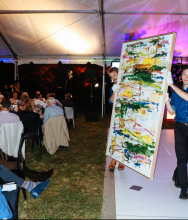 A work by Kikuo Saito auctioned at the Guild Hall gala.