An exhibition of collages and box constructions by Hannelore Baron (1926 – 1987), drawn from the artist’s estate and a very special private collection, is now on view at Leslie Feely Fine Art. Born in Dillingen, Germany, Baron’s family escaped Nazi Germany in 1939, eventually settling in New York.

Baron’s use of collage and found objects invites comparison to the work of Kurt Schwitters, Joseph Cornell, Robert Rauschenberg, and early Joseph Beuys, but her creations are all her own. These highly personal works both embody and transcend the traumatic experiences of her childhood, as well as the anxiety and depression she suffered as an adult. With a belief in the healing power of art, she developed a private artistic language that transformed her life. Her detailed fabrications warrant close inspection, revealing a breadth of material, a variety of textures, and a delicate, handmade quality. Textiles comprise a key component of her work, and may act as tribute to the small fabric shop owned by her parents. Baron stressed the fabric’s centrality to her message, writing that her works were not “painting[s] showing torn cloth and paper, but the very cloth and paper itself.”

She first explored watercolor and drawing, not making her first collages until age forty and beginning her box constructions soon after. The year 1969 marked a distinct change in her artistic development, with a focus on culture replacing her earlier depictions of nature and the seasons. Baron declared, “all old or ancient art is of interest to me,” and her enigmatic creations evince a sense of mystery and ritual reflecting her fascination with ancient civilizations and mythologies. She also references folk traditions, children’s games, and documentation ranging from official forms to diaries and postcards. Relic-like, her collages and boxes suggest remnants of a long gone world, or a physical manifestation of vague, half-vanished memories.

Baron merges this investigation of the artifact with a profound awareness of her present. Even as her wrapped works paid homage to “Egyptian mummies, American Indian burial costumes, and other archaeological finds,” she asserted that they “reminded me of the body bags in Vietnam.” Recognizing that she could not participate in “the way other people march to Washington, or set themselves on fire, or write protest letters, or go to assassinate someone,” Baron found that “my way out, because of my inability to do anything else for various reasons, has been to make the protest through my artwork...” Perhaps because they are outright products of her activism, these weathered, fragmentary works pulse with an intensity that precludes any sense of resignation or defeat. Instead, they emerge from her “strong feeling… that as an exhibiting artist it is my duty to make a statement for peace.”

At once childlike, weary, and hopeful, Baron’s collages and boxes emerge as emissaries of her emotional sensitivity and unique mode of self-expression. With her poetic creations she bridges the intimate and the universal, crafting microcosms of existence that convey the simultaneous beauty and wear of the human condition.

Hannelore Baron is included in the collections of the Museum of Modern Art, Solomon R. Guggenheim Museum, the Whitney Museum of American Art, Art Institute of Chicago and Los Angeles County Museum of Art. This is the second exhibition of Hannelore Baron at Leslie Feely Fine Art. 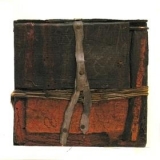 Bedford + Bowery At The New Museum, The Keeper is a Haven for Historians, Hoarders, and Humanity
07/21/16 View More 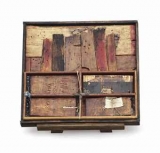 "Hannelore Baron's delicate, scorched-looking Wunderkammern feel as though they were salvaged from hell..." 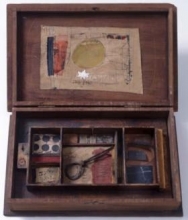 Hannelore Baron’s sculptural hodgepodges—assembled from wood scraps, personal belongings, and other refuse—reflect the losses she experienced as a child during Hitler’s regime: before her family escaped Germany, their textile shop was destroyed and their home ransacked during Kristallnacht. 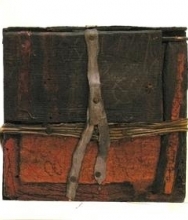 Bedford + Bowery At The New Museum, The Keeper is a Haven for Historians, Hoarders, and Humanity
07/21/16

Hannelore Baron’s found object wooden box assemblages look like they’ve experienced wear and tear because her family and their shop experienced the trauma of Kristallnacht, and Baron considered worn or splintered items items that have survived and prevailed. 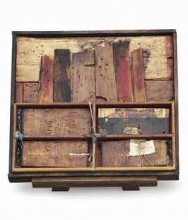 Object Lessons: The New Museum Explore Why We Keep Things

Curators at the New Museum have created an exhibit with over 4,000 objects that examines the carious wats we collect and own items.